‘Post-truth’ is the Oxford Dictionary’s word of the year.

The definition of ‘post-truth’ is, “relating to or denoting circumstances in which objective facts are less influential in shaping public opinion than appeals to emotion and personal belief.”

So why is this important?

The events which have shaped the last 12 months have far less to do with fact, logic and reason and much more to do with prejudice, fear and ignorance.

The Era of Post-truth Politics

Quite frighteningly, we now live in the era of ‘post-truth’ politics. Facts are treated as fluid and personal beliefs, irrespective of whether those beliefs have any basis in fact at all, have assumed importance in shaping public debate. It is harder than ever to break through the static of traditional and social media to discuss and debate facts. Our politicians, the media and our general civic discourse all share a degree of responsibility for this parlous state of affairs.

Unfortunately, the reality is that we have been headed there for quite some time now. But it was the recent election of Donald Trump in the United States which launched this behaviour into the stratosphere. Trump rode a wave of ‘truthiness’ into the White House. Similar to ‘post-truth’, truthiness is the quality characterizing a ‘truth’ that a person making an argument or assertion claims to know intuitively ‘from the gut’ or because it ‘feels right’ without regard to evidence, logic, intellectual examination, or facts. 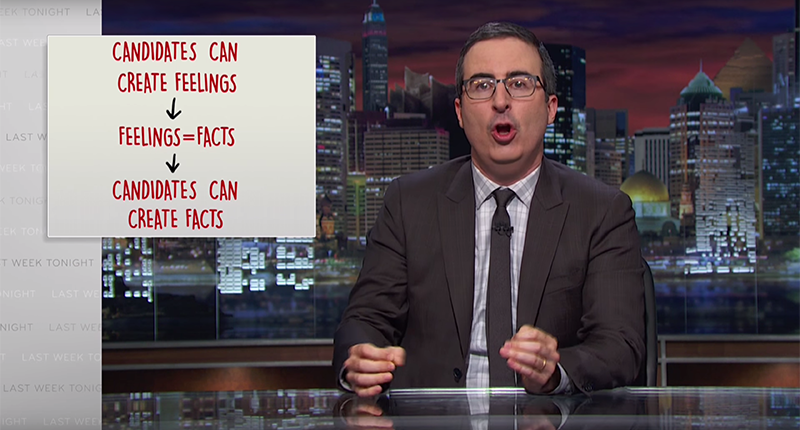 Donald Trump has been elected the 45th President of the United States despite making statements which were awarded PolitiFact's 2015 Lie of the Year. Here is his scorecard:

However, that would be waving the white flag and giving in to vested interests – the wealthy, the elites and the extremists. We cannot concede public debate about our lives, our jobs and our communities to those willing to engage in deception, factoids and truthiness.

Without resistance, the policy outcomes will undoubtedly be bleak; more inequality, less diversity and less opportunity for all.

Stand Up, Fight Back

The question, as it has always been, is whether you are willing to stand up, to fight and to be counted?  This is both a question and a challenge for all working people.

Facts matter. The truth matters. We cannot allow workplaces and our communities to be dominated and shaped by corporate and elite self-interest camouflaged as fact.

Now more than ever we need to find the fortitude and the resilience to stand up against unfairness and prejudice. We need to give voice to the truth.  We need to find our collective voice once again.

The starting place is in our workplaces

No longer can we meekly accept ‘clicktivism’, that warm inner glow we get from supporting a good cause online. We can no longer just share a Facebook rant and mistakenly believe we have made a real difference.  We can no longer just mouth platitudes of support, “Good luck …. we’re behind you …”, and not be there shoulder to shoulder.  It will take more than words. It will take attending meetings, rallies and events. Writing letters, submissions and emails. It will take unrelenting organising.  And (shock, horror) we all need to do it, we all need to participate and not wait and hope that someone else does it for us. There can be no proxies in this battle. Everyone needs to have skin in the game.

There is an important saying, “History is written by those who turn up.” It is time to turn up.